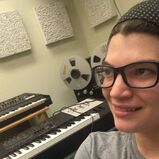 Megan Denslinger is currently a part-time music specialist at Bach to Rock Music Schools in Northern Virginia where she is teaching private woodwind, violin, and piano lessons as well as group piano and early childhood classes. I also assist with sound recording for summer camps and student projects. Megan is also a clarinetist in the Charlestown Symphony Orchestra in West Virginia.

Megan graduated from Radford University in Radford, Virginia in April 2021 with a Master of Arts in Music with a concentration in Music Composition. Megan also received her Bachelor of Science in Music in Spring 2019 from Radford University with a concentration in clarinet. She studied composition with Dr. Bruce Mahin and clarinet with Professor David Perry (previous teachers for clarinet include Dr. Cramer (2016-18) and Dr. Allen (2015-16)).

As a composer, Megan has composed a number of compositions for her short stop-motion animations using electronic sounds and effects. She has also composed a plethora of chamber works for mixed ensemble configurations of varying sizes and occasionally mixes acoustic and electronic music together. Megan also composes for solo instrumentalists and large ensembles following more traditional techniques using sonatas, theme and variations, rondos, preludes, dance suites, marches, etc. Since beginning to compose formally in 2014, many of her compositions have been performed and recorded over the years by the assistance of her colleagues and professors.
Megan enjoys exploring the possibilities with how to fuse electronic music through the use of MIDI and recorded audio sounds with acoustic instruments to enhance her music. Her most recent pieces, both electronic and instrumental, such as “A Day at Sea,” “River,” “Dance Suite for Two Clarinets,” and “Quartet No. 4” have been described as "video game-like" and "scenic." While composing a new piece, Megan tries to hold a certain aesthetic towards the musical styles of the Baroque and classical eras while utilizing musical techniques unique to the 21st century to establish a new musical story.

As an instrumentalist, before COVID-19 limited performance opportunities, Megan actively played clarinet (Eb and Bb) and alto saxophone in the Radford University wind bands, jazz ensembles, pep bands, and pit orchestras. In the Spring of 2020, Megan built and lead several chamber ensembles for her graduate composition recital which was ultimately postponed until October of 2020 due to COVID-19. Despite the COVID-19 performance restrictions, Megan was able to continue to build chamber ensembles to perform and record her new compositions throughout the 2020-2021 year. Beginning in the fall of 2017, Megan frequently performed as a clarinetist with Winds of the Blue Ridge in Roanoke, VA through spring 2020 and subbed in the Bedford Community Orchestra in 2017. She has also performed in community ensembles in Tampa, Florida including "Summer Breeze," an ensemble built from the Bay Area Youth Winds alumni and current members in 2016 and 2017.
​
Megan is also an avid researcher on the symphonic music from the 19th and 20th century. She has completed her master's thesis project, “A Comparative Study on the Thematic and Motivic Development of Gustav Mahler’s Symphony No. 4, First Movement, and Nikolay Rimsky-Korsakov’s Symphony No. 3, First Movement.” The thesis provides an insight on how development of themes and motives fit with the structure of a sonata form and how compositional devices are used to advance the development of musical themes and motives through a comparative analysis of both works.
Contact Information:
Email: mkdmusictunes@gmail.com
YouTube: Megan Denslinger
Website: www.mkdmusictunes.com
Vimeo: https://vimeo.com/mdenslinger
Society of Composers, Inc.
Commissions and Arrangements
For inquiries about commissioning new works, please contact me via email. I will be happy to discuss what you would like to have written and flexible for any medium and ensemble.

As always, if you have any questions, comments, or concerns, please let me know!